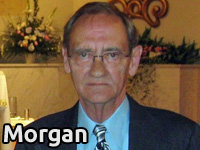 AUBURN -- Former WAUB 1590 owner Richard "Dick" Morgan has died.  Although Morgan owned the station for only a few years in the 1990s, he spent more than 30 years working at the station, starting out as an announcer.

Morgan passed away on Friday at the age of 66.  According to his obituary, Morgan joined the WAUB staff in 1964 as an announcer.  He also worked in the sales department, eventually working his way up the ladder to sales manager and general manager.

One CNYRadio.com reader, who wishes to remain anonymous, recalls Morgan "was instrumental" in getting FCC approval to upgrade WAUB from a daytimer to 24/7 status in 1988.

In 1992, Morgan formed Morgan Media, and purchased the station.  He only owned the station for a few years before exiting broadcasting and working at other jobs outside of the business.

Morgan is survived by his mother, Joan, his wife of 44 years, Mary Lou, two sons, and several grandchildren.  His father, William A. Morgan, also a former WAUB manager, passed away in 1992.

Calling hours will be held 4-7pm Tuesday at the White Chapel Funeral Home at 197 South Street in Auburn.  A Mass of Christian Burial will be celebrated on Wednesday at 9:30am at Holy Family Church, and burial will be at St. Joseph's Cemetery in Fleming.  In lieu of flowers, the family is requesting donations to Matthew House, 43 Metcalf Ave, Auburn, NY 13021.

CNYRadio.com extends our condolences to the family, friends and colleagues of Dick Morgan.