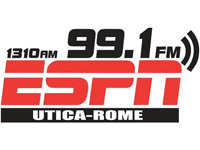 Conte tells CNYRadio.com that Cain's on board with ESPN Utica-Rome 1310/99.1 (WTLB, WIXT, WRNY and W256AJ) as a fill-in host for his weekday afternoon talk show "The Cheap Seats."  We learned about the assignment after a CNYRadio.com reader recently wrote in to ask if the "Bob Cain" filling in was indeed the same Bob Cain who hosted mornings at WODZ until he was let go last March.

Cain is also providing reports during intermissions of Utica College hockey games on ESPN Radio, and Conte adds, "with Bob's experience, I am sure he will find his way into other areas of endeavor here at Galaxy Communications."