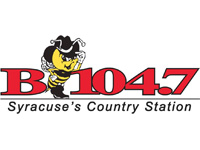 B104.7, owned by Clear Channel, was one of five nominees for Medium Market Station of the Year.  This week, ACM said judges selected a station from Bakersfield, CA.

The B104.7 morning duo of Tom Owens and Becky Palmer also had their own nomination, for Medium Market On-Air Personalities of the Year.  In that category, the judges sided with a three-person team from a station in Tulsa, OK.

If anyone can claim bragging rights, locally-owned New Country WOLF 105.1 can do so -- at least indirectly -- as nationally-syndicated host Cody Alan was named National On-Air Personality of the Year.  WOLF-FM carries his nightly program, "CMT Radio Live with Cody Alan," weeknights from 7pm to midnight and Sundays from 7pm to 11pm.

The bulk of the Academy of Country Music Award winners will be revealed live on the CBS television network, on Sunday, April 7.  However, several categories, including all of the radio category awards, are presented in advance of the telecast.  Winning stations will receive their awards during a private reception in Las Vegas on the day before the telecast.