Where are they now: Randy Gorbman moves up Rochester dial 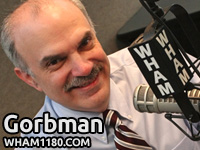 Scott Fybush -- filing this week's edition of Northeast Radio Watch from the floor of the NAB Show in Las Vegas -- reports Gorbman has been hired as news director at NPR affiliate 1370 WXXI, along with PBS affiliate WXXI-TV and station website wxxi.org.

According to the Rochester Democrat and Chronicle, Gorbman begins his new job on April 15.  In addition to overseeing 10 people at WWXI, Gorbman will be involved with coordination of coverage for "The Innovation Trail," a joint project involving several public radio stations across upstate New York.  (If the "Innovation Trail" sounds familiar, WRVO, based in Oswego, is also a member station.)

The D&C reports WXXI Vice President Jeanne Fisher said Gorbman will "occasionally" appear on-air to file reports, but the bulk of his time will be spent off-air, focusing on the administrative side of the job.

Gorbman's arrival will fill a vacancy WXXI has had since the previous news director left in December.  Likewise, Clear Channel is now soliciting applications for Gorbman's position at WHAM.

According to his LinkedIn profile, Gorbman started at WHAM in 1994. Back in 1998, Northeast Radio Watch reported Gorbman's return to WHAM after having spent "a couple of years" as operations manager at Utica news/talker WIBX.

One comment on “Where are they now: Randy Gorbman moves up Rochester dial”