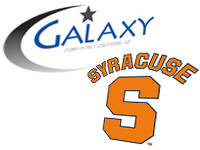 SYRACUSE -- While it's not officially a "done deal" yet, Galaxy Communications is reportedly expected to hold onto the radio rights for Syracuse University football, basketball and lacrosse for at least another five years.  Both sides have spoken favorably about each other, and it appears an official deal could be announced sometime this week.

That's according to Brent Axe, in an article on syracuse.com this afternoon.  Axe says Galaxy CEO/President Ed Levine made an announcement over the weekend during the Basket Ball Gala, a fundraiser for the Jim and Juli Boeheim Foundation.  Jim Boeheim is the head coach of the SU men's basketball team, and Levine and his wife Pam were honored as "MVPs" at the Saturday night event.

Although Levine was telling people about the extension, Axe reported, "details are still being worked out," which explains why an official announcement has not yet been issued by any of the parties involved.

Galaxy has held the radio rights to Syracuse University athletics since 2007.