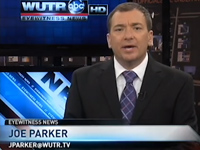 Newly added to the story late Friday night, General Manager Stephen P. Merren confirms for CNYTVNews.com, "Joe Parker is no longer with Eyewitness News."  Beyond a simple confirmation of Parker's exit, Merren said he could not discuss the matter any further.   (Editor note: We originally ran this story without confirmation, but based on the observations presented through the rest of the original story, which continues below.)

One CNYTVNews.com reader pointed out that when Gillis flew solo for tonight's 6pm newscast, she never referred to Parker being "off" for the night.  Additionally, Parker's WUTR Facebook page has disappeared, and he hasn't posted anything to his WUTR Twitter account since yesterday.  Parker normally had plenty of social media activity each day, either posting his own news updates, or relaying updates from members of his Eyewitness News staff.  Parker also often posted video clips for newscast promos.

If that's not enough, our observer says Chief Meteorologist Jeff Parker confirmed Parker's departure on-air tonight, near the end of the 6pm newscast, thanking Parker for all of his efforts at the station and in the community.

Parker had been news director and co-anchor since WUTR and WFXV relaunched local newscasts nearly two years ago, ending an eight-year stretch during which WUTR had no local news operation, leaving NBC affiliate WKTV to enjoy a local broadcast television news monopoly in the Utica market.

WUTR's other original co-anchor, Caroline Gable, exited the station after about six months, and has since resurfaced in Syracuse at ABC affiliate WSYR-TV.  Gills, who was with the launch of Eyewitness News as a reporter, has been co-anchoring with Parker on WUTR, and solo-anchoring Fox affiliate WFXV's 1opm newscast since Gable exited.

Even if you missed Matthews' mention on-air, the CNYHomepage.com site has removed Parker from its news talent bio page, usually a tell-tale indicator that a personality and a station have parted ways.

Anytime there's news happening inside your local radio or TV station, let us know!  You can email cnyradio@cnyradio.com or use our handy Contact Form.  All requests for anonymity are always honored with the highest regard... and if you use the Contact Form, you can leave the name and email fields blank, so even we won't know who you are.  Contact us in confidence anytime.