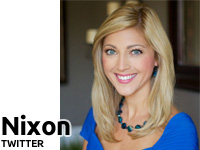 SYRACUSE -- This week, NewsChannel 9 (WSYR-TV) morning traffic reporter and Bridge Street co-host Kaylea Nixon announced she's leaving the station.  It appears that her replacement -- at least for the morning traffic portion -- will be Caroline Gable, who's been absent from local TV since exiting Utica's WUTR in March.

Someone on the syracuse.com TV/Radio forum leaked word of Nixon's departure more than a month ago -- at that time, CNYTVNews.com contacted one official at NewsChannel 9, who referred us to contact General Manager Theresa Underwood.  We tried, but did not receive any response from Underwood.

A pair of CNYTVNews.com readers wrote in to tell us that Nixon announced her departure on-air on Tuesday morning.  Upon hearing the first tip, we still couldn't confirm the news, but after our second tip, received today, we did find a "tweet" by Nixon confirming her departure.

Several followers responded with well wishes, and to one who asked what she'll be doing in the Windy City, Nixon said:

Nixon started hosting Bridge Street as a substitute while Tanja Babich was on maternity leave near the end of 2010.  When WSYR-TV announced it would begin producing local programming in HD in February 2011, it also announced a four-way staffing shuffle in which Nixon would retain the co-host title permanently, while Babich was named co-anchor of The Morning News.

Despite her relatively short stint as co-host (considering Bridge Street has been running for eight years), Nixon and co-host Chris Brandolino were named "Best TV News Hotties" in last year's Best of Syracuse awards, and Nixon was featured on the cover of Today's CNY Woman magazine last September.  Prior to joining NewsChannel 9, viewers were familiar with Nixon from her appearances in spots for a local car dealership.

As our tipsters indicated, we also confirmed that Caroline Gable is already handling traffic reports on The Morning News this week.  But it looks like the former Utica anchor might not be taking over all of Nixon's duties, as the WSYR-TV website currently lists an opening for a Bridge Street Host/Producer.  With Nixon and Brandolino both off today, news anchors Dan Cummings and Staci-Lyn Honda pulled double duty to co-host this morning's episode of the 10am talk show.

As one tipster wrote, it's notable that Gable, who just exited the Nexstar-owned WUTR in March, will soon be working for Nexstar again: last month, the company announced plans to buy WSYR-TV and eleven other stations owned by Newport Television.  The deal is pending approval from the Federal Communications Commission.

Covering all of the happenings at roughly a hundred radio and TV stations in three markets is no easy task... we're always grateful for your help!  Whether you're a station manager with an official announcement (or an informal one), or an insider, a viewer, a listener or anyone else who happens to know something we haven't reported here yet... cnyradio@cnyradio.com is the email address, or if you prefer, use the Contact Form.  Don't want us to use your name?  Just let us know and we'll honor your request -- or, if you use the Contact Form, just leave your name and email blank.