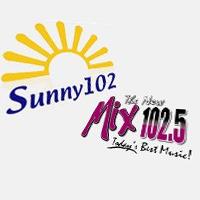 SYRACUSE -- After years of going "all-Christmas" on November 1, classic hits Sunny 102.1 (WZUN) is pushing back the start of its annual flip to holiday mode until mid-November.   Co-owned Utica-Rome hot AC station Mix 102.5 (WUMX), which used to also flip on November 1, will be holding off even longer -- until Thanksgiving.

Station officials announced today that Sunny 102 will go all-Christmas on November 19, to coincide with the annual "Lights on the Lake" at Onondaga Lake Park in Liverpool.  For years, station owner Galaxy Communications has partnered with Onondaga County Parks as a sponsor to "provide the soundtrack" for the annual drive-through display of holiday lights.

Mix 102.5, also owned by Galaxy, will make the switch on Thanksgiving day, November 28.

In a press release issued today, "Traffic" Tom, the brand manager for both stations, explained the later start dates:

"This year, we decided not to participate in the over commercialization of Christmas.  We have been doing our research, and based our results, we want to give the community what it wants, at the appropriate time. While there are some people who enjoy Christmas music any time of year, and we can’t start it soon enough for them, the majority of our audience thought that we started playing the music too soon every year."

For as long as your editor has been running this website, we can recall both stations flipping promptly at midnight on November 1, with the exception of last year, when Mix 102.5 waited until November 6 to roll out the garland and mistletoe.

Although that allowed the two Galaxy stations to share the honors of being first to go all-Christmas in their respective markets, another locally-owned company, WOLF Radio, Inc., grabbed that distinction Syracuse this year.

On October 5, the company moved its mostly-religious "Love Radio" (WVOA) from 103.9 FM to 88.7FM, making way for "Holly-FM" (WNDR) on 103.9 and translator 95.3.  The move -- rumored to be a publicity stunt for a possible new format to launch after the holidays -- drew nationwide attention for possibly being the first station in the country to go all-Christmas in 2013, and among the earliest (if not the earliest) all-Christmas flips of all time.