Where are they now: Dave Vieser moves to CBS News Radio 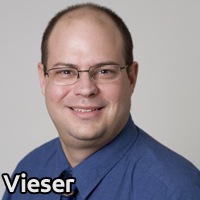 NEW YORK CITY -- Continuing our catching-up on news from "while we were out on hiatus," former CNY broadcaster Dave Vieser checks-in to share some good news.  The former Assistant PD and morning co-host of the Morning News Watch on Ithaca's WHCU is now back on WHCU -- and hundreds of other radio stations across the country -- as a correspondent for CBS News Radio.

The last time you read about Dave Vieser here, he had resigned from WHCU in early 2012, after several years on the early shift at the Ithaca news/talker.  Earlier in his career, Vieser worked as a news producer at NBC 3 (WSTM) in Syracuse, and his resume includes stations in North Carolina, Iowa, Illinois, Nevada, and even "a stint at The Weather Channel and NBC," according to his Facebook profile.

In 2012, Vieser thought it was time for a break from the wake-up shift.  But after a year of working bankers' hours -- literally, he was working for a bank in Ithaca -- Vieser said, "I decided I had to get back into the business."  He explains that it was tough to watch some of the year's biggest stories from outside of a newsroom.  "I missed the 2012 Presidential election, and most importantly, Superstorm Sandy which had destroyed the home I grew up in as a child on Long Island."

"My first love is radio," Vieser said, "so I am thrilled and quite honored to have been hired [by] CBS News."  In a typical day at work, Vieser says he writes, edits and produces many of the stories heard during CBS newscasts heard at the top of the hour on affiliate stations nationwide.  In addition to the top-of-hour newscasts, Vieser says the New York City newsroom supplies stations "with individual cuts for their use in their own newscasts."

Although it sounds like a huge jump for someone who came from a station in Ithaca (ranked #285 by Arbitron before the ratings giant dropped the market in 2009), Vieser has similar experience from the job he had prior to joining WHCU in 1995... when he worked for the NBC NewsChannel, based in Charlotte, North Carolina.  That's the service which feeds video clips and scripts out to NBC television affiliates nationwide.  "The experience at WHCU and the NBC work really have molded together into a dream come true."

After putting in his time "behind the scenes" in midtown Manhattan, Vieser recently was added to the rotation of anchors for the hourly network newscasts, bringing his voice back to WHCU and nearly 600 other stations.  Here's a clip from a late September newscast:

If you want to hear more of Dave, he tells CNYRadio.com he'll be anchoring the top-of-hour newscasts this Saturday (or late Friday night, if you prefer) from midnight through 4am, Sunday from 5pm to 10pm, and next Sunday, the 17th, from 5-10pm.  Dave also noted a number of other broadcast journalists who made it to the national level via CNY:

Vieser said he hired Glor and Rossen as interns at WSTM in the 1990s, and worked with Henning and Halpern in the 2000s in Ithaca.  About working for CBS in New York, Vieser says, "it is my dream job.  I enjoy it more and more everyday."

Our thanks to Dave for checking in... congratulations and all the best to you in the new role!