UTICA-ROME -- While your editor was at the Great New York State Model Train Fair this past weekend at the State Fairgrounds in Syracuse, his eyes were quickly scanning the vendor tables for good deals.  Meantime, his girlfriend spotted an interesting find on a display board assembled by the Utica & Mohawk Valley Chapter of the National Railway Historical Society. 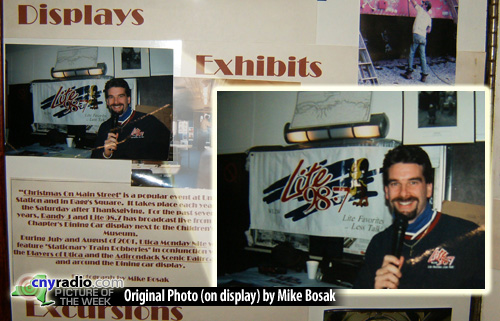 She spotted a photo of former Lite 98.7 (WLZW) morning host and program director Randy Jay.  Considering it has been more than 8 years since Jay left the station in 2002, your editor got a kick out of seeing this photo on display.  (Disclosure time: Randy Jay hired me at Lite 98.7 in 1999, promoted me to a full-timer in 2001, and I then became PD after he left in 2002.)

The caption below the photo reads as follows:

"Christmas on Main Street" is a popular event at Union Station and in Bagg's Square.  It takes place each year on the Saturday after Thanksgiving.  For the past several years, Randy J [sic] and Lite 98.7 has broadcast live from the Chapter's Dining Car display next to the Children's Museum.

During July and August 2001, Utica Monday Nite will feature "Stationary Train Robberies" in conjunction with the Players of Utica and the Adirondack Scenic Railroad in and around the Dining Car display.

There's no specific date listed for this photograph, but based on the caption, we're guessing it was taken in 2000 or perhaps earlier.

And for anyone else out there who might be a fan of both radio and model railroading, I did make a purchase, but there won't be any photos of my "layout" for awhile, as it doesn't exist yet.  Someday... though likely later rather than sooner.

We're always looking for pictures of what's happening today at your station, or -- like this week -- a blast from the past.  Thanks to reader contributions, we're good for the next week or two, but we're always happy to have more submissions to ensure that the "picture queue" won't run dry.  There's a new Picture of the Week every Friday, so send those shots to cnyradio@cnyradio.com or upload them via our Contact Form.

Additional disclosure: In addition CNYRadio.com Editor Peter Naughton involvement with Lite 98.7  as noted above, Naughton left the station in 2004, but re-joined the staff as a part-time weekend DJ in 2009.