Updated 6:20pm - In the rush to get this done before heading out to Thanksgiving festivities, your editor forgot to insert the full-size photo into the article.  It's here now -- our apologies!
AUBURN -- For our second week in a row, thanks to your reader submissions, we have a "classic" Picture of the Week!  This one comes to us from Rudy Paolangeli, the former GM and morning man at WAUB in Auburn.  It's a photo from a memorable promotion he did for the station back in 1960. 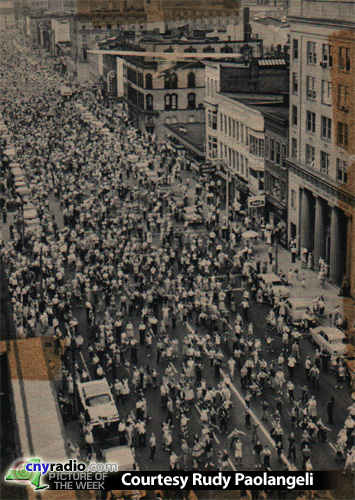 Rudy explained it best when he sent the picture, so we'll just paste in the text of his email:

Remember PING PONG BALL DROP promotions? On July 20, 1960, WAUB Auburn, NY General Manager and Morning Host, Rudy Paolangeli, broadcast live from a very low flying Piper Cub airplane along Genesee Street in downtown Auburn. (note the plane was flying lower than the tallest building!) Thousands of Ping Pong balls were dropped, many stuffed with vouchers for valuable prizes. Merchants were asked to set up a radio in front of their stores tuned to WAUB, providing a huge outdoor PA system. An estimated 10,000 people showed up, making it the largest ever for a downtown Auburn promotion.

Paolangeli later became morning host and GM of WHCU/WYXL in Ithaca, retiring from the biz full-time in 1988.  He continues to host a nostalgic music program Sundays from 10am to noon on WHCU.  He also owns and operates RP MEDIA, a professional recording studio out of his home, which was featured in a May 2009 Picture of the Week.

We're always interested in what's happening today at your station, or a look back at memorable occasions from the past.  There's a new Picture of the Week every Friday, and reader submissions are always greatly appreciated.  Send those shots to cnyradio@cnyradio.com or use the Contact Form or you can post to the CNYRadio.com Facebook page.