ITHACA/CORTLAND -- It's been awhile since we've had a Picture of the Week from Ithaca; we haven't seen any broadcast-related images from the Finger Lakes since November.  After 8 weeks in a row back and forth on the Thruway between Syracuse and Utica/Rome, we're overdue to aim our Picture of the Week spotlight back towards Ithaca. 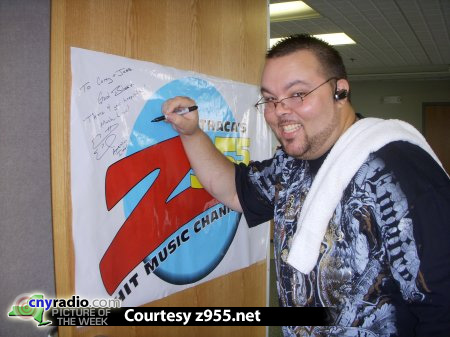 If you're a big American Idol fan, you might recognize this guy -- Scott Savol, the 5th place finalist from the Fox TV show's 4th season.  He spent some time in the studios at Z95.5 (WFIZ) back in August.  He was in town to perform his new single and to act as a celebrity judge at the ROI Broadcasting station's "Z Star 2010" competition.  You can see more pictures of Savol's in-studio appearance (including a close-up of what he wrote with his autograph on that station banner) on the Z95.5 website.

We're always interested in a look at what's happening today at your station, or a look back at something/someone/something notable from the past.  Has your station never been featured in Picture of the Week at all?  Has it been a long time?  Reader submissions usually skip right to the front of the line, so send those shots to cnyradio@cnyradio.com or upload via the Contact Form.  There's a new Picture of the Week every Friday.