SYRACUSE -- When CNYRadio.com marked its 10th anniversary last month, we asked many longtime local radio personalities and managers where they see radio headed in the next ten years.  Near the end of that article, we had a quote from 93Q (WNTQ) morning host Ted Long, who suggested we “feature more ‘Picture Of The Week’ flashbacks to when I was thin and had hair.” Well, as the saying goes: ask and you shall receive! 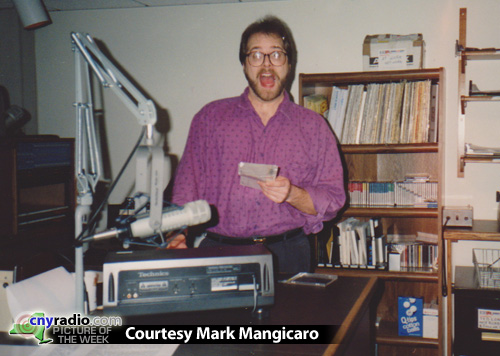 Ted may have just been joking, but when Mark Mangicaro saw the quote in our article, he came through with this scan from his personal archives.  Mark writes:

Here is one I took of Ted in the early in the early 1990s while [Ted] was in the production room when the 93Q studios were located on Old Stone House Road in Jamesville. I don't recall what I said to elicit the reaction on his face. It could have been, 'What would you think if I told you that 20 years from now we will both be practically bald and neither one of us will be as slim as he is today?'

Of course, it's a coincidence (but admittedly, one that somehow seems fitting) that we're running this photo on April Fool's Day. We've recently had an unprecedented backlog of reader submissions for POTW, and when Mark sent this one in, we had already promised specific dates to the other submitters -- making April 1st the earliest Friday available.

Has it been awhile since your station has been featured in Picture of the Week?  Well, it's easy to change that!  The majority of our photos are reader-submitted, so if you have something going on at your station (or if you happen to uncover a notable shot from the past), just send it in! The email address is cnyradio@cnyradio.com or you can upload via our Contact Form. There's a new Picture of the Week every Friday.