Updated at 8:00am - ROME -- Any longtime residents of the Copper City are being asked for help in piecing together the history of a vintage "WKAL On The Air" sign recently found "stashed away in the rafters" at the Capitol Theatre.  WKAL used to be located within the theatre.  Officials want to restore the sign, but they also hope to hear from anyone who may know more about the exact placement of this sign when it was active. 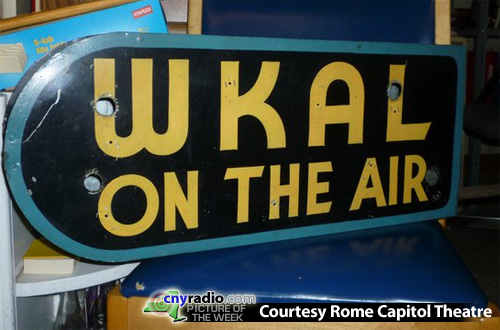 Ironically, this POTW comes to us almost one year (minus a day) since we ran a WKAL publicity poster from Tim Merchant as our Picture of the Week.  Today's photo was recently posted on the Capitol Theatre's Facebook page, along with the question, "does anyone remember where this particular sign was located in the theater?"

The WKAL call letters come from the fact that the radio station -- and the theatre where it was once located -- were both owned by the Kallet Family.  According to Wikipedia, the Capitol opened in 1928.

Updated 8:00am - We originally discussed how it was more difficult to find an exact start date for WKAL, and we had a few conflicting sources as we tried to zero in on the date.  But thanks to Jerry Reed, we now know WKAL first signed on in 1946.  That's thanks to an old newspaper clipping he has from the Utica Daily Press.  To be precise, WKAL made its debut on November 25, 1946.

Today, WKAL is still on the air, but with different call letters.  Tune your AM radio to 1450 in Rome and you'll hear WYFY, the local affiliate of the satellite-fed Bible Broadcasting Network.  But that'll change soon: you may recall reading here in February that BBN is selling WYFY to Tune In Broadcasting.  As part of the $90,000 deal, BBN will retain the WYFY call letters, forcing Tune In to select a new set.  No word yet on what the new identifier will be.

Your editor, a former volunteer and board member at the Capitol many years ago, wishes to thank his father for spotting this picture and passing along the link.  As of this writing, we've got one more photo "in the queue" for next week, but after that -- it's up to you!  Has it been awhile since your station has been featured in Picture of the Week?  It’s easy to change that!  The majority of our photos are reader-submitted, so if you have something going on at your station (or if you happen to uncover a notable shot from the past), just send it in! The email address is cnyradio@cnyradio.com or you can upload via our Contact Form. There’s a new Picture of the Week every Friday.