ALBANY -- Not many people have the honor of saying they were the General Manager of two prominent radio stations before turning 30, especially in a top-75 market.  But Robert Ausfeld did just that, and after nearly four decades in radio, he's set to retire at month's end.  Although Ausfeld was based in Albany, he oversaw one cluster of Utica-Rome stations for part of his career. 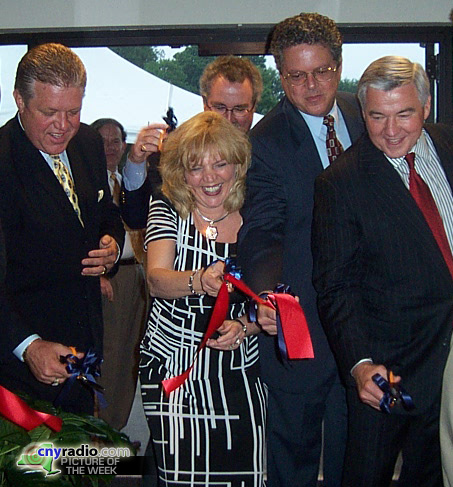 In honor of Ausfeld's long career, your editor recalled this 2003 photo in which Ausfeld, on the far-left, drove out from Albany to help open the new studios and offices for what was, at that time, the Utica/Rome cluster of Regent Broadcasting.  Next to Ausfeld is Utica/Rome Vice President and General Manager Mary Jo Beach, who retains that same title to this day under Regent's successor, Townsquare Media.

According to the Albany Business Journal, Ausfeld started his career in sales at WPTR 1540 when he was 23 years old.  By 1979, he was the GM of WPTR and sister station WFLY 92.3.  Thanks to evolving ownership rules and station acquisitions throughout his career, the Journal notes that Ausfeld "worked for 11 owners without changing offices."

Ausfeld, 61, will officially retire as of August 31.  He says he wants to spend more time with his family "while I'm feeling good and my health is good."  We wish him all the best for happiness in his well-deserved retirement!

A familiar name -- both in Albany and Syracuse -- has been named to replace Ausfeld.  Dan Austin had worked in Albany for several years before arriving in Syracuse in 2008 as GM of the Citadel cluster.  He was there for a little over two years before taking a job last April with CBS in Seattle.

Radio-Info reported earlier this week, Austin will only be assuming Ausfeld's local duties within the Albany-Schenectady-Troy market, while Ausfeld's "Regional VP" duties will be handed over to Jeff Silver, the GM of Townsquare's Buffalo cluster.

We're really hoping to have our annual "State Fair Mega Picture of the Week" right here next Friday, assuming your editor can make it to the fair before then.  But after that, we're back to "regular programming," where we prefer to feature your submissions rather than our own picks.  Radio or TV, current happenings or "blasts from the past," we're always glad to share your submissions.  Send those shots to cnyradio@cnyradio.com or upload via the Contact Form.

Disclosure Statement: CNYRadio.com editor Peter Naughton was the full-time PD and afternoon host at WLZW, a then-Regent now-Townsquare property, at the time he took this photograph.  Since late 2009, he has been a part-time weekend on-air host for WLZW.