SYRACUSE -- "You'd never know it by looking at the picture," says WSYR-TV Assistant News Director Roger Mirabito, but a scary-looking scene involving the ABC affiliate's satellite truck late last week -- was all caused by a simple mechanical problem that cost less than ten bucks to fix. 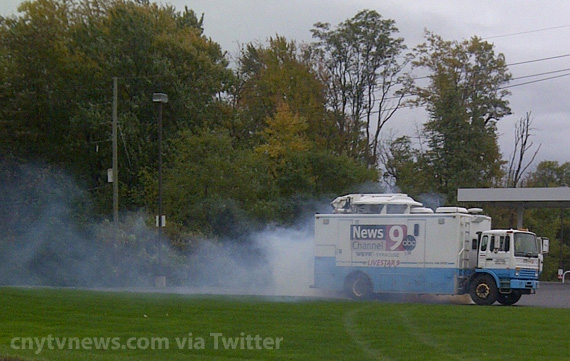 Here's a photo from Friday, showing Livestar 9 surrounded by a cloud of smoke.  (We're not sure exactly whom to credit for the photo, as we've spotted it on Facebook and Twitter, posted by different people.)

Mirabito tells CNYTVNews.com, "we had a news crew and our satellite truck headed to an incident involving the Seneca Indians."

Although the picture looks pretty bad at first glance (the original "tweet" we found implied the truck was on fire), Mirabito explains, "we had some mechanical issues."  Thankfully, nobody was hurt in the incident.  Mirabito added, "the part needed to fix the problem cost seven dollars!"

Livestar 9 has been part of the station's newsgathering arsenal since 1996.