SYRACUSE -- Weekdays on The Score 1260 (WSKO), it's Mike Lindsley on middays, followed by Brent Axe in the afternoon.  But Mike was talking with a different Brent earlier this month at the Carrier Dome -- specifically, longtime network TV sportscaster Brent Musburger.  And you'll find a couple other familiar faces in the background... 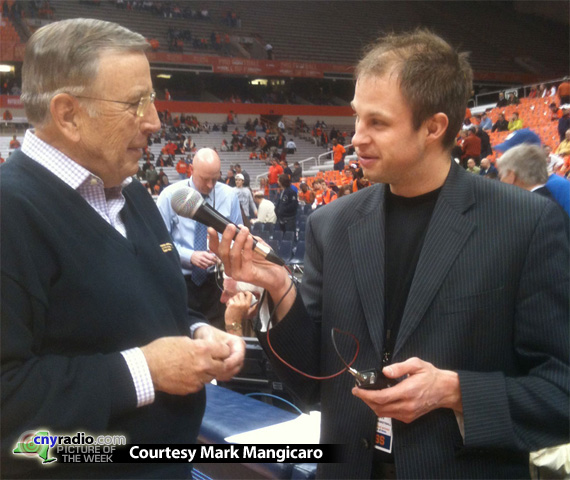 Thanks to Mark Mangicaro for sending in this shot, taken inside the Dome minutes before the Syracuse Orange men's basketball team embarked on what would become a thrilling 63-61 overtime win over the Georgetown Hoyas on February 8.

Musburger, left, was in town to call play-by-play for ESPN.  His telecast partner that night was legendary college basketball coach-turned-broadcaster Bob Knight, who can be seen seated just behind the pair, chatting on the phone.  And just a few steps further back, you'll notice SU basketball star-turned-broadcaster Matt Roe, prepping his gear to interview Knight for the SU Basketball Radio Network.

We've been holding onto this photo since the day after the game (thanks again, Mark, for sending it in), and with that, our Picture of the Week queue is once again empty.  We're always interested to see what's happening today at your local TV or radio station -- or a look back to a notable "blast from the past."  Send those shots to cnyradio@cnyradio.com or upload through the Contact Form.  There's a new Picture of the Week right here, every Friday... and we're able to come through on that promise every week, thanks to reader-submitted photos like the one you see above.