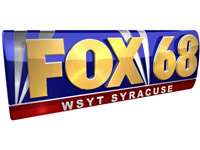 VIRGINIA BEACH, VA -- Charles "Chuck" McFadden, a former owner of Fox 68 (WSYT) in Syracuse, passed away on Monday at the age of 79.  After more than three decades in various television sales and management jobs, McFadden formed his own company in the late 80s and bought WSYT in 1991, operating the station until selling to present-day owner Sinclair Broadcasting in 1997.

According to an obituary published in the Virginian-Pilot on Tuesday, McFadden had been battling prostate cancer.  He is survived by his wife of 57 years, along with five children and eleven grandchildren.

Born in Denver, McFadden would begin his television career in 1952 at WOW-TV (now WOWT) in Omaha, Nebraska, while attending Creighton University.  After graduation, McFadden joined the U.S. Army, eventually becoming a member of the Army Special Forces.  After his honorable discharge, McFadden got back into television in various sales and management capacities, including early syndication of the Phil Donahue Show.

After years of other management roles, McFadden would eventually form his own company, Encore Communications, which bought WSYT in the early 1990s.  During that time, Encore became Max Media, before the station was sold to Sinclair broadcasting.  (According to FCC records, Max Media asked for permission to sell in 1997, but approval was not given until June of 1998.)

After selling WSYT-TV, the obituary says McFadden joined Max Media II as a senior partner and consultant, a position he would retain until his passing.  Outside of work, McFadden was an avid skier into his seventies and enjoyed traveling with his wife -- visiting all seven continents.

Visiting hours are being held tonight in Virginia, and a funeral mass will take place tomorrow morning.

CNYTVNews.com wishes to thank Tom Taylor from Radio-Info.com for emailing us this morning to share the link to Chuck's obituary.  Our sympathies to Chuck's family, friends and colleagues.