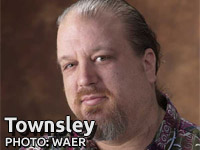 SYRACUSE -- After nearly 26 years of hosting Sunday Night Blues for WAER 88.3FM, local blues musician Tom Townsley has just four shows left. Townsley has a new job lined up, so his last show for WAER will be July 29.

The Syracuse University-owned public radio station says Townsley has accepted a full-time position to teach English at Mohawk Valley Community College in Utica. "In order to perform my duties for this new job, I find it in my best interest to reserve Sunday nights for class preparation," Townsley said.

Townsley's run with WAER started in 1986, a time when blues music was exploding in popularity. In a press release, station officials recall artists like "Stevie Ray Vaughn, Robert Cray and others were getting major radio play" and it was a natural conclusion to try "building an audience around a local radio show" dedicated to the genre. Sunday Night Blues was so successful, it doubled from two hours to four hours in length, and spinoffs appeared elsewhere on WAER's lineup.

Out of those spinoffs, one hour still exists on Friday nights, and that's where WAER is turning for Townsley's replacement. Friday Night Blues host Tom Corbett says he is "excited and honored to carry on the tradition of Sunday Night Blues." He'll become the Sunday night show's regular host as of August 5.

Fans of Townsley need not worry: "I’ll still be performing in the area, so you may rest assured you haven’t seen or heard the last of me," he said, adding, "to quote John Lee Hooker, 'I’ll never get out of these blues alive!'"

Got News? Let us know!

Our thanks to WAER General Manager Joe Lee for including cnyradio@cnyradio.com on his distribution list for media alerts. Anytime there's news happening at your local radio or television station, that's the address to get our attention.  If you would rather submit a news tip anonymously, our Contact Form will allow you to reach us discreetly.