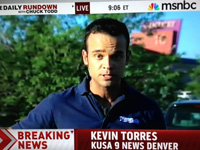 AURORA, CO -- When his shift at Denver's KUSA-TV ended on Thursday night, Kevin Torres was supposed to be starting a mini-vacation.  Little did he know that he'd soon be back at work, headed to the scene of the movie theater mass shooting which was all over the news on Friday.The former NewsChannel 9 (WSYR-TV) reporter says it was one of the most emotional experiences of his career.

Torres described that long evening from his perspective today on his personal blog.  He and a photographer were sent to the Century 16 theaters where the shootings had taken place.

All through the night, Torres provided live reports for KUSA, and later, he appeared live on the Today Show, as well as on MSNBC (as seen in the above photo).  Torres' mother, who lives near Rome, happened to catch the report on Today.

Torres worked at Syracuse's NewsChannel 9 from 2006 to 2009, and he's been at Denver's KUSA since then.  Prior to working in Syracuse, Torres worked at Watertown's WWNY-TV, a job which overlapped with his last couple of years attending SUNY Oswego.