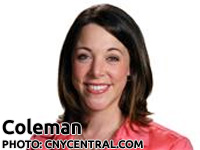 According to an announcement on CNYCentral.com, Coleman's new schedule begins on Monday, when she returns from the maternity leave she started in April.  The announcement says she'll be appearing alongside Matt Mulcahy for WSTM's 5:00, 5:30 and 6:00pm newscasts, but it doesn't make mention of the 11:00pm newscast.

And that's not all -- Coleman is picking up the title of "News Content Manager," where she'll work with other managers "to oversee the day-to-day and long term direction of the news content of CNY Central."

CNYTVNews.com started receiving tips from trusted sources in local broadcasting about Robinson's retirement and Coleman's promotion early last week.  At that time, we attempted to obtain confirmation from management at CNYCentral, but never received any response.

Coleman first joined WSTM as an intern while attending Syracuse University.  After graduation, she worked in Texas for awhile, then returned to WSTM in 2003 as a reporter.  She's been anchoring Today in Central New York since 2004.

Speaking of the early morning shift, CNY Central also named Lisa Spitz as permanent anchor for WSTM's 5-7am newscast.  She's been filling in for most of the time since Coleman's maternity leave started.  Spitz also joined CNY Central in 2003, after having worked for a few years at ABC affiliate WUTR in Utica.

Our thanks again to the various sources who provided information to CNYTVNews.com regarding these developments.  Anytime you've got news to share within your local radio or TV station, cnyradio@cnyradio.com is the email address... and if you'd prefer to remain anonymous, just say the word and we'll leave your name out of it.  If you don't even want us to know who you are, click "Contact Us" at the top of the site to use our handy contact form, where you can leave your name and address blank.