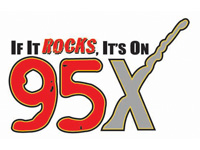 SYRACUSE -- After filling-in as Interim Program Director at 95X (WAQX) since October, Joe Detomaso has been named the active rock station's permanent PD. Detomaso, who goes by "Joe D" during his midday on-air shift, has been with the station for nine years.

In a press release from Cumulus Media, the parent company of 95X, Operations Manager Tom Mitchell said, "Joe has shown strong leadership of the 95X team."

Calling Detomaso "the backbone of the station's success," Market Manager Shane Bogardus said, "I am thrilled Joe has accepted the role," adding that he expects the new PD "will continue to do the things that make 95X entertaining for the Syracuse Active Rock listener."

Detomaso started out in the promotions department, eventually adding on-air duties. Prior to becoming interim PD in October, Detomaso was serving as the station's Assistant PD and Music Director. In addition to hosting middays during the week, "Joe D" is also host of the heavy metal-focused "Saturday Night Scream," a fitting duty for a professional bass guitar player whose resume includes some time touring with Joey Belladonna of Anthrax.

Looking Back... and Ahead

The PD chair at 95X opened up in mid-October, when former PD / morning co-host Hunter Scott and morning co-host Josh Grosvent suddenly resigned one morning, only to reappear across town at Galaxy's K-Rock stations later in the week.

Cumulus Media took legal action against the pair.  Although a New York State Supreme Court Justice ruled that the duo could continue to work for K-Rock, the court sided with Cumulus in barring the pair from using the program title "The Show," the fictional character "Chalkdust" and the term "Beer Friday" on their new station.

We review that background not to scratch open any old wounds, but to remember that there's still one more key vacancy at 95X -- with Detomaso now promoted from interim PD to the full PD title, it appears that one of his first major official duties will include hiring a permanent morning host for the station.