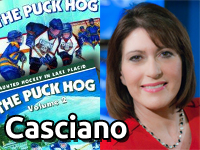 SYRACUSE -- For people with a "normal" nine-to-five workday, taking an evening side job is called moonlighting.  It's just the opposite for NewsChannel 9's Christie Casciano.  Before she arrives in the newsroom for her nightside shift, she spends many mornings daylighting -- as an advice columnist for fellow "hockey moms" all over the country.  And, in an indirect way, the advent of high-definition TV helped make it possible.

Even if you only know a little bit about Christie Casciano beyond her job as the anchor of the ABC affiliate's 10pm newscast (on WSYR-TV 9.2) and co-anchor of Eleven at 11:00, you've probably heard about her children's book, The Puck Hog, published in 2010.  The book, which teaches kids the importance of teamwork, was a success -- even garnering a rave review from MSG broadcaster Stan Fischler.  A follow-up,  The Puck Hog Volume 2: Haunted Hockey in Lake Placid

, was released this October (and received an equally-positive review by Fischler... and some attention from NHL.com).

But before the books, there was the "Syracuse Hockey Mom's Blog," which Casciano started in 2009.  On the blog, her mission statement is short and simple: "Building a network of moms and dads who share the common goal of building kids with good hockey skills and good character."

Perhaps thanks to the buzz about her two books, Casciano tells CNYTVNews.com, "the editor of USA Hockey Magazine came across my blog and liked the advice from a perspective of a 'mom in the trenches.'  So he asked me to write a monthly column!"  The column debuted this September.  "I've written about everything from how to organize your hockey household, successful fundraising strategies," she says, and one column was titled, "Oh Behave!  How to act like an adult at a youth hockey game."

For the December issue, currently available on the magazine's website (click here and go to page 10), Casciano offers her advice on avoiding stressful situations when hockey families combine their already-demanding schedule of practices, games and playoffs with the hustle and bustle of the holiday season.  "I've had a lot of positive feedback from hockey parents around the country," she says, and there's plans to to begin contributing occasional advice pieces to NHL.com.  "It's been incredibly rewarding work that has awakened my creative writing soul!"

Finding the extra time to do all this writing can be attributed partly to NewsChannel 9 upgrading its local news operation to high-definition in 2011.  The debut of local news in HD was accompanied by an anchor lineup shuffle.  Casciano, who had co-anchored the early morning newscasts for many years, was moved to the night shift.  "Now that I'm working an evening shift, I have a lot of free time in the mornings," she explains.  "I have SO much more energy, not having to be a slave to the 2:00am sound of the alarm clock."

Some mornings, Casciano says, "I am also doing school visits and developed a program called 'Read, Write and Assist.'  It's a character education based program using hockey as the hook."