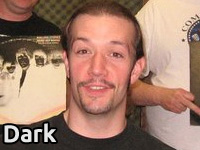 SYRACUSE -- Later this month, Ronnie Dark will be hosting the 200th edition of his weekly "Wax Museum" program on Love Radio 103.9 (WVOA).  To help mark the milestone, there's a contest for fans who produce original artwork to help promote the show.

CNYRadio.com received an email from Tim Loucks, the show's promotion and events coordinator.  He describes the rules as follows:

The drawings can be of anything, i.e. bands, artists or show personalities. However, no copyrighted images will be accepted and the art must contain the words "The Wax Museum with Ronnie Dark on WVOA Love Radio 95.3, 103.9 or listen online at wvoaradio.com.  We will create an album on our Facebook page, and the image that gets the most "likes" from our fans will win a super prize!! The families of anyone affiliated with the show are not eligible. Looking forward to seeing all the original artwork!!!"

Entrants can upload their artwork directly to the show's Facebook page or via email to waxmuseumronniedark@gmail.com.

Some of the prizes have already been revealed in photos on the aforementioned Facebook page, and there's even a much longer, detailed note on Facebook in which Ronnie Dark recaps the contest and thanks many of the people who helped him along the way as he nears his 200th show.

"The Wax Museum with Ronnie Dark" debuted in 2009 and airs Sundays from 7:00pm to 10:00pm on Love Radio 103.9, WVOA/Mexico.  The station is simulcast on FM translators 95.3/Syracuse and 98.1/LaFayette.  If you're not within radio range, the station streams online at wvoaradio.com.