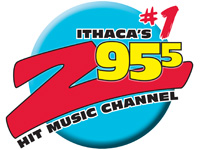 ITHACA -- A Dryden man recently won$10,000 from Z95.5 (WFIZ) and Cornell University Athletics, the largest single prize awarded by any radio station in the Ithaca/Cortland market in recent memory.  It was all thanks to a combination of good aim and good luck.

Z95.5 issued a press release today, announcing the February 16 giveaway.  Rich Trinkl of Dryden was selected for the station's "Slap Shot Jackpot" contest, held during one of the intermissions of a women's hockey game between Cornell and Dartmouth.  Trinkl was tasked with making a shot from the opposite side of center ice -- and he sailed the puck right through.  "Amazing," said Z95.5 program director Gabe Carrillo, who had an up-close view of the successful shot, standing right next to the net.  "I think everyone was in disbelief for the first few seconds, especially Trinkl."

Z95.5 says the $10,000 cash prize is the largest single prize awarded by an Ithaca/Cortland radio station in at least the past five years, if not ever.

GM Frank Lischak said, "This is what local radio is all about."  He said Cornell University officials loved the idea, and "with their help, we were able to execute the contest flawlessly and award one of our listeners a prize that will make a substantial, positive impact on his life.  It will also give the crowd of 2,500+ something to talk about for a long time."

Carillo said Z95.5 often gives away prizes tied into local events, but "this goes above and beyond anything we've ever done in my two years with the radio station.  To be part of a truly life-changing moment for a listener is something special and I'll never forget it."