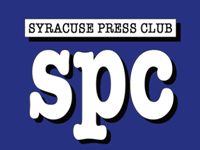 SYRACUSE -- Three people will share the honor of being named the "Best News Source" at the Syracuse Press Club's annual awards dinner this Saturday. Additionally, the Press Club officially confirmed the previously-leaked winner of the Best Newcomer Award.

SPC says nominees credited Heffernan and Galloway with being "dedicated, devoted forces who make themselves routinely available to media inquiries." Between them, the pair have 54 years of experience with the department. The award is a nice way to wrap up a career for Heffernan, who will retire from SFD later this month. He plans to continue working as a private fire investigator in the insurance industry.

Although Kae Young currently works at Fort Drum, more than an hour north Syracuse, she's still within the Syracuse Press Club service area -- and she's no stranger to Syracuse media outlets. SPC says Young started her career in communications at Syracuse's CBS-5 (WTVH) as a production assistant, and eventually became a news reporter. She later served as assignment editor for channel 9 (then-WIXT) for more than a decade before aking a similar job at Watertown CBS affiliate WWNY before accepting her current position with the Army.

The award is named for Philip Hofmann, who was a managing editor of the Syracuse Herald-Journal/Herald-American and Syracuse Press Club president. The club says Hoffman "strived for the most effective job of serving public interest by the news media."

Even though this one was inadvertently leaked via a congratulatory tweet a few weeks ago, it wasn't until this week at the Syracuse Press Club officially announced CNY Central's Tom Eschen Jr. is the 2013 winner of the A. Brohmann Roth Newcomer Award.

The award is named for Roth, a former Herald-Journal columnist who encouraged younger journalists to do their best work and take steps to grow within their newly-chosen career. Anyone working in the SPC service area, who is new to the field of journalism within the past 3 years is eligible to be nominated for the award.

Eschen graduated from Ithaca College in 2011 with a degree in journalism and joined CNY Central in 2012 as a part-time reporter. Five months later, he was promoted to full-time status. Eschen splits his time between general assignment and sports reporting, and recently added weekend sports anchoring duties.

All of the above, plus Career Achievement Award winner Bill Worden, who recently retired after 35 years of anchoring at Utica's NewsChannel 2 (WKTV/NBC), will be officially recognized at the Syracuse Press Club's annual awards and scholarship dinner on Saturday at Drumlins Country Club in Syracuse.

The Club will also reveal the rankings for previously-announced winners of the annual Professional Recognition Awards competition. Proceeds from the competition and the dinner help fund the SPC's annual scholarship to a local journalism student. The benefactor of that scholarship will also be recognized at the dinner.