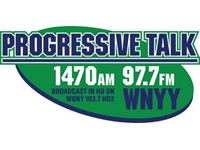 ITHACA/CORTLAND -- There's a new way to listen to progressive talk radio in the Ithaca area.  The Cayuga Radio Group announced Progressive Talk 1470 WNYY is now being simulcast at 97.7FM.  Group head Chet Osadchey says the new signal "adds greater coverage into downtown Ithaca, and on both the Cornell and Ithaca College campuses."

The new 97.7FM signal is a translator (W249CD), authorized to broadcast with an effective radiated power of 175 watts from a tower location a couple of miles south of Ithaca.  Although FCC records show the signal transmits from a height of zero meters above average terrain, the city of Ithaca lies in a relatively low-lying area at the southern end of Cayuga Lake -- so the tower location on South Hill serves as an adequate perch for the signal to cover the city and surrounding areas.

Plans for the new FM translator go back to at least last December, when the Cayuga Radio Group's parent company, Saga Communications, filed FCC documents requesting permission to buy the translator's construction permit from Cavalry Chapel of the Finger Lakes, Inc.  When the CP was issued last October, Cavalry said it had planned to use W249CD to simulcast a Palmyra radio station.

In March, the FCC approved the $60,000 sale, along with Saga's proposal to build out the transmitter at a different location than Cavalry had originally planned.

"Over the years, we have had many requests from listeners to bring this station to the FM dial, and we are proud to finally be able to invest and accomplish the goal," said Osadchey in a press release today.  Although it was possible to hear WNYY on the FM dial prior to today's launch, doing so would have required a relatively pricey HD Radio receiver to hear the simulcast on the HD2 subchannel of sister station Q-Country 103.7FM (WQNY).  Anyone who invested in the technology won't be left in the dark; the HD simulcast will continue.

“Progressive Talk is very popular in Ithaca and around the region.  It offers our listening audience great conversation, news, and entertainment about topical social and political issues.  In our academic-driven economy, it is a fantastic communication source for listeners, advertisers, and the community.” said Osadchey.

Reflecting the changes, there's also new address for the station website -- wnyyradio.com -- though for now, it's redirecting to the original address, which makes reference to the AM frequency, 1470wnyy.com.