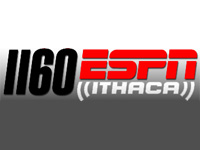 ITHACA -- ESPN Radio 1160 (WPIE) will soon be expanding to the FM band.  According to FCC documents filed last week, WPIE owner Taughannock Media has agreed to pay $50,000 to take over the construction permit for an as-yet-unbuilt FM translator.  The seller is the same religious outfit that has recently sold two other FM translator construction permits to another commercial cluster in the area.

If you guessed the seller is Cavalry Chapel of the Finger Lakes, give yourself a pat on the back.  The deal was announced in yesterday's FCC Daily Digest, though we'll give props to the national Tom Taylor Now newsletter for breaking the story earlier that morning.  The construction permit in the spotlight this time is for translator W297BI, authorized to broadcast 10 watts at 107.3FM.

In a separate application filed in May, Cavalry has already requested permission to increase the power to 99 watts, and to move the tower to a different site.  In that filing, Cavalry provided a map comparing the expected coverage area of the translator as currently authorized, and that of the proposed new arrangement.  The original plan has W297BI located well southeast of Ithaca, with the 60 dBu contour barely reaching the city.  The new tower site will allow W297BI to improve its coverage of the city.  In either arrangement, Danby will be considered the official community of license for the translator.

The June 5 application for permission to transfer the construction permit from Cavalry to Taughannock includes the purchase contract and the $50,000 price tag for the deal.  Although we didn't spot any wording which makes the deal contingent on the FCC approving W297BI's move and power increase, that doesn't appear to be a problem -- the FCC lists both applications as "accepted for filing," which means the Commission doesn't see any immediate problems with either application.  After a mandatory waiting period for public comment, both applications appear likely to receive approval.

ESPN Radio 1160 is authorized to run at 5,000 watts during the daytime, but the FCC requires WPIE to slice its power to 310 watts between sunset to sunrise.  Once the FM translator is up and running, listeners within its coverage area won't need to worry about losing the signal when night falls.

Earlier this year, Cavalry Chapel of the Finger Lakes sold two other FM translators to the Cayuga Radio Group, a subsidiary of Saga Communications.  In May, Saga began simulcasting Progressive Talk 1470 WNYY on  translator W249CD at 97.7FM.  And last week, the two sides filed FCC paperwork for Saga to take over the construction permit for 99.7FM (W244CZ).  Although the application says W244CZ will simulcast Q-Country 103.7 (WQNY-FM), some observers predict Saga may ultimately launch a brand new format using one of its FM stations' HD subchannels, and use the translator to make the new format accessible to those without HD Radio receivers.