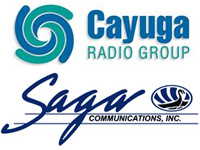 ITHACA/CORTLAND -- The Cayuga Radio Group is adding another FM translator to its stable of frequencies.  From the "better late than never" file, the group is buying the construction permit for 96.7FM (W244CZ) from Cavalry Chapel of the Finger Lakes, the same group from which Saga purchased 99.7FM (W249CD), which now simulcasts 1470 WNYY, last month.

According to FCC documents, Cavalry filed the W244CZ construction permit application in March, with plans to simulcast Saga's Q-Country 103.7 (WQNY), per written permission from Saga.  The FCC approved of the construction permit on May 22, and an application to transfer the permit to Saga was submitted to the Commission on May 29.  A purchase contract attached to the application shows Saga will pay $60,000 for the translator once the deal closes.

With both of Saga's AM stations already simulcasting on the FM dial (news/talker 870 WHCU is also available at 95.9FM), and WQNY's existing signal covering the market adequately on its own, various observers, including Scott Fybush of NorthEast Radio Watch and Tom Taylor, are expecting Saga to use the new translator to launch a new format.

Of course, translators aren't allowed to originate their own programming -- they are only allowed to repeat another station.  Although Saga hasn't confirmed any plans yet, it's likely the company will expand on a strategy it has been using for a few years now -- by launching the "new" format as an HD subchannel of WQNY, and then using the new FM translator to simulcast that HD stream.

With WQNY and WYXL both already "maxed out" at two HD subchannels each, it's likely the new format will have to launch as a subchannel of rocker I-100 (WIII).

Cavalry's application to transfer the W244CZ license to Saga was "accepted for filing" by the FCC on May 30.  This means the Commission doesn't have any immediate objections to the sale.  Assuming there are no significant objections brought forth during a mandatory waiting period for public comment, the deal appears to be on track for approval.  Regardless of the outcome of the sale, the translator must be constructed and on-air before the construction permit expires on May 22, 2016.  Construction is not expected to take very long, as the application documents show the new translator will use one of WNYY's existing transmission towers.