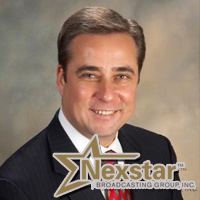 ALBANY -- Two broadcasters with ties to Central New York are among the five men named as this year's inductees to the New York Broadcasters Hall of Fame.  Former WTVH General Manager Bill Ransom, Nexstar Broadcasting CEO/President/Founder Perry Sook and three others will be honored at a special ceremony next month in New York City.

Nexstar greatly increased its footprint throughout the state nearly a year ago, when it acquired a good chunk of the former Newport Television, including WSYR-TV and stations in Watertown, Elmira, Binghamton.  The company also owns stations in Rochester and the dual-state market of Burlington, VT and Plattsburgh, NY -- basically, every TV market in the state except Buffalo, Albany and New York City.  According to the New York State Broadcasters Association website, "Nexstar currently owns and/or operates a total of 72 network affiliated television station [sic] in 41 markets," across a total of 18 states.

Former WTVH general manager Bill Ransom is also headed to the NYS Broadcasters Hall of Fame.  He held the top office at Syracuse's CBS affiliate starting with Granite Broadcasting's 1993 purchase of the station from its original owner, the Meredith Corporation.  His stay in Syracuse was relatively short, as Granite would promote him in 1995 to the same position at Buffalo's WKBW, where he remains to this day.  Since 1998, Ransom has also served as Corporate Senior Vice President of Granite's Northeast region.

As upper management types, Sook and Ransom have had their fair share of kudos and criticism over the years.  Do you think they are appropriate selections for the Hall of Fame?  Share your thoughts in the comments section below.