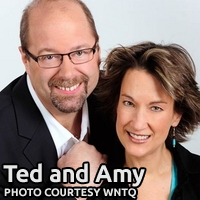 SYRACUSE -- They've woken us up for two and a half decades, arriving unannounced with their witty banter blaring through our clock radios.  For 25 years, "Ted and Amy in the Morning" on 93Q (WNTQ) has helped Central New Yorkers start their days.  The station is honoring the pair with a huge party this Saturday at the Sheraton University Hotel in Syracuse.  Recently, Ted and Amy spoke with CNYRadio.com about their jobs.

Ted Long was already at 93Q when he and Amy Robbins were paired in 1988.   CNYRadio.com asked the pair about the best of times since over the past 25 years and what's to come.  Their comments about their work and the past quarter century confirm what many listeners already suspect - that they love to entertain and make people laugh.

CNY Radio: How long have you been in broadcasting?

Ted: This will be my 33rd year in radio, all here at 93Q. I started pretty much right out of high school.

Amy: I graduated from Ithaca College in 1987 and had a job strictly doing newscasts for a year (at the now-defunct WEZG-FM). I got the job at 93Q in 1988 and have been here ever since!

CNY Radio: Did you always want to go into radio?

Ted: I knew that I wanted to be in the entertainment field in some capacity. My dream job would have been doing cartoon voices, but when the opportunity arose to go into radio, I jumped into it.

For Amy, who attended several local schools, graduating from Camden, the passion started in the seventh grade when she took a tour of Channel 3 (WSTM), led by Laura Hand.

CNY Radio: How did you get your break?

Amy: "I got my break when they were looking for a young female news person to come in and do the news on the morning show. I had interviewed the year before and they remembered me!"

Ted was still a student at Marcellus High School. He was emceeing a talent show in high school; one of the judges was Fran McGrath from 93Q. Ted had known Fran's daughter from school; he told Ted that he might have a future in radio and encouraged him to come in to make a tape. "The rest," he said, "is history."

CNY Radio: What are your favorite parts of what you do?

Amy: "I have loved my job from the beginning because it's different every day. We talk about different things, talk to different people, play different music. I just love that and it makes my job go by so fast!"

Ted: "I love being able to make somebody's ride into work or school better by making them laugh, or brighten someone's otherwise miserable day. It's a good feeling."

CNY Radio: Who are your favorite guests from over the years?

Ted: "We had the entire Brian Setzer Orchestra on the air once. They were playing at Turning Stone and we had them in the morning of the show. We had an audio company come in to set up the sound and we had musicians lined up in the lobby, down the hallway to the men's room. Brian sat in the studio with us to sing and play guitar. That was a great one."

Amy: "Steven Tyler from Aerosmith was by far the nicest celebrity guest. We focus more on local guests than national, and it works best when they listen to the show and are so comfortable because they feel like they're having a conversation with us."

CNY Radio: What has changed in your jobs over the years?

Amy: "The first music I played was reel to reel. That was WAY back in the 1900s! We used to have to edit reel tape with a razor blade when it came to news audio, interviews, anything....now, obviously, everything is done on computer, including the DJs on some air shifts. Luckily, 93Q still has a lot of live DJs."

Amy also pointed out that radio stations are now owned in clusters; in the 1980s, one company might own one AM and one FM station in each city.

Ted: "Everything is digital now. When I started, we still had turntables in the studio. Now everything is on hard drive. It's made my job so much easier, but the down side is that not a lot of people are necessary to run a radio station now."

Just about anybody who has listened to Ted and Amy remembers at least one of their practical jokes. They can't do phone pranks anymore, Amy lamented, because it's illegal to record someone without their knowledge.  April Fools' Day pranks are always a big hit, although she said it's getting harder to pull them off because everyone is expects them now.

Both of them named as their favorite prank the year they told listeners to cover their phone jacks because the phone company was going to "blow the magnetic dust" out of the lines, to improve sound quality. To prevent any of the dust from getting into your home, you were supposed to wrap your phone in a garbage bag. According to Amy, the entire Onondaga County Sheriff's Office fell for it.

Another time, they told listeners to trade in their $5 bills for new money, because the bills would go bad by the end of the day. People believed them, and Amy said some local banks complained.  (Editor's Note: here's a CNYRadio.com story about a Ted & Amy April Fools' Day gag from 2002 that managed to spread to another radio station.)

"Ted was great at doing phone pranks," she added.

CNY Radio: What is the biggest misconception people have about your job?

Ted: "Probably the biggest misconception people have is that we blow in at 5:30 a.m., (when their show  starts) talk for 4-1/2 hours, then leave. There's preparation, off-air work, and behind the scenes things that go into the morning show. I don't leave the building until at least 10:30 a.m.!"

Amy agreed, adding that they also do appearances at schools, charities and other functions. She also said they do not get to pick their music. "We have a music director and an operations director who choose the music from research, both nationally and locally," she said.

(Both need to get up at around 3:00 in the morning. Coffee is a must; every morning, Ted, the gentleman, stops at Dunkin Donuts and brings an extra coffee for Amy!)

CNY Radio: As the music has evolved, from the introduction of rap music in the 1980s to boy bands to the Britney craze, what trends have surprised you?

Amy: "Top 40 music is always changing and we are at the mercy of what's popular. Personally, I'm not a big rap girl, and when the trend was more urban a few years ago, I was really not into that. Now, it seems it's headed more toward 'feel good' pop songs and acoustic guitar ballads sung by good-looking male artists, so I'm all over it!"

Ted: "Music is always an evolving art that seems to recreate itself...so it's always surprising what direction it takes, especially when something you thought was over resurfaces. An example would be that the British female soul sound of a Dusty Springfield reborn as Adele."

CNY Radio: What kind of music do you listen to?

Ted: "I like the music we play, although I do listen to a lot of Internet podcast talk radio. I get a little 'music-ed out' after being on the air all morning."

Amy: "The Eagles have been my favorite since high school, and I just saw them a couple of years ago in concert! They never go out of style. I also love Elton John, and, truthfully, love the music that 93Q is playing these days."

CNY Radio: How long will you keep doing this?

Amy: "I will keep doing this until it's no longer fun, or until we are way too old to introduce a Ke$sha song and still sound hip, although we may have never sounded hip introducing a Ke$sha song!"

Ted: "I hope to retire from my job someday, or, until my wife wins the lottery, whichever comes first!"

Ted and his wife, Bobbie, live in Baldwinsville. They have three grown children, Taylor, Harry and Ashley, and two dogs. Amy and her husband, Mark, live in Cicero with their cat, Sarnoff.

For information about Ted and Amy's 25th anniversary party on Nov. 16, visit http://syracuse.sweetdealscumulus.com.  The fun starts at 6 p.m. with cocktails and hors d'oeuvres, and includes dinner, and dancing to live music.