SYRACUSE -- For the first time in years, you won't see 93Q (WNTQ) at this weekend's Syracuse Balloonfest.  But they're OK with that -- because the Citadel CHR brought some top names to town last weekend for their very own "Summer Jam on the Island" concert last weekend, and they say it was a huge success. 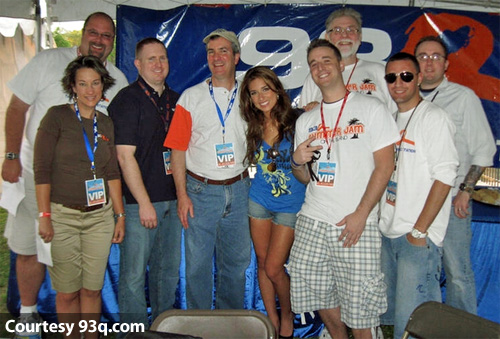 Mitchell says attendance was 3,000 people -- and that total was easy to count because the only way to get into the concert was to win the free tickets from the station.  He tells CNYRadio.com, "we received over 333,500 text messages over the 5 week period listeners could text in to win."

As you might have guessed, tickets were also awarded over the air via traditional "listen to win" contesting methods, and through an entry form on the station website.

The concert, which was first announced in April, also featured performances from former American Idol finalist Elliot Yamin, and the bands 3OH!3, The White Tie Affair and SafetySuit.

You can see many more pictures from the event on the 93Q website.

Got Pictures?
We're always interested in a look at what's happening today at your station, or a glance back at something notable from the past.  There's a new Picture of the Week every Friday, and yours could be next!  Send your pictures to cnyradio@cnyradio.com or upload them via the Contact Form.