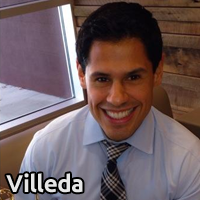 DALLAS -- Congratulations to former Syracuse TV news reporter Ray Villeda, who scored himself a 2013 Lone Star EMMY Award this past weekend.  Villeda, who has been reporting at NBC affiliate KXAS for the past two years, was recognized for outstanding achievement in presenting live field reports.

Villeda said his winning entry consisted of "a bunch of my [live] hits from the year which included some creative, interactive hits."

The compilation was titled "Journey-lism." He tells CNYTVNews.com he came up with the name because, "I felt like this past year took me on an incredible journey, thus far in my reporting career."

And while Villeda may spend most of his time on local stories in the Dallas-Fort Worth metroplex, some of the stories in Villeda's entry literally took him on some long journeys -- Hurricane Sandy, the school shootings in Sandy Hook, Connecticut, and the West, Texas fertilizer plant explosion, to name a few.  "It was really an incredible time period of news," Villeda said.

The 2007 graduate of Ithaca College made his TV debut on Syracuse's NBC3 (WSTM-TV) in 2007.  Almost a year later, he moved up the dial to ABC affiliate NewsChannel 9 (WSYR-TV), where he spent another year and a half before moving back to his native Connecticut for a job at New Haven's WFSB.  In 2011, Villeda moved to his present station in the nation's fifth-largest television market.

"Glad to say I got my start in CNY," Villeda told us.  "Wouldn't be here if it weren't for some great folks who taught me so much."

According to the Lone Star EMMY Awards website, Villeda was one of five nominees for the award.  The judges called it a tie between Villeda and KXAS co-worker Ben Russell.  The winners were announced during a special ceremony on Saturday, November 9 in San Antonio.