Update: Sinclair closes on channels 3 and 6 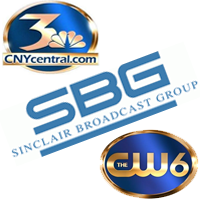 SYRACUSE -- It appears Sinclair Broadcast Group has officially closed on its purchase of NBC3 (WSTM-TV) and CW6 (WSTQ-LP).  Although the change hasn't been made on the FCC's own website just yet, the new ownership became on-air official at the close of tonight's 6pm news on NBC3.

Our thanks to an anonymous CNYTVNews.com viewer who gave us a heads-up to pay close attention to the copyright credit at the end of tonight's newscast.  Sure enough, just after anchors Matt Mulcahy and Megan Coleman said their goodbyes, the CNY Central jingle and logo video rolled.  Just a couple seconds before it ended, "Copyright 2013 Sinclair Broadcast Group, Inc." appeared on the screen.

When we reported on Tuesday that the FCC approved of Sinclair's bid to buy WSTM and WSTQ, an inside source told CNYTVNews.com that both sides were expected to close on the sale quickly, perhaps as soon as this week, or next week at the latest.  Sinclair is also inheriting Barrington's shared services agreement to operate CBS5 (WTVH) on behalf of Granite Broadcasting.

Tonight's new on-air copyright notice shows that the keys have been handed over, even though CNYCentral.com still has Barrington's name on the copyright notice and the company's logo prominently featured on it's "station history" page as of Friday night.

Because FCC ownership rules forbid one entity from owning more than one "top four" television station in a given market, Sinclair's purchase of WSTM and WSTQ was contingent on it selling Fox 68 (WSYT), which it has owned since 1998.  Bristlecone Broadcasting paid $20 million for the assets of WSYT and agreement to operate My43 (WNYS) on behalf of owner RKM Media.

But, for at least the next six months, Bristlecone is paying Sinclair to handle the day-to-day operations at WSYT and WNYS, per a "transition services agreement" filed on the FCC website along with the rest of the sale-related documents.

So even though Sinclair only owns WSTM and WSTQ outright, the various agreements give the company -- at least through part of the second quarter of 2014 -- control over nearly every major commercial TV station in the Syracuse market, with the exception of Nexstar-owned ABC affiliate NewsChannel 9 (WSYR-TV) and Ion Media's WSPX-TV.