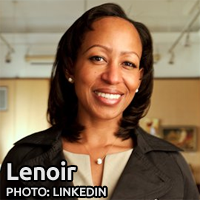 UTICA-ROME -- Former WIBX 950 news anchor Jeanette Lenoir is reportedly suing WIBX parent Townsquare Media, after obtaining a "Notice of Right to Sue" from the U. S. Equal Employment Opportunity Commission.  Lenoir alleges she was paid less than white colleagues, overlooked for promotional opportunities and was fired without explanation in 2012.

First word of the lawsuit comes from this morning's Tom Taylor Now newsletter (by the way, you can subscribe for free).  Taylor graciously provided CNYRadio.com a copy of the lawsuit, which was filed on December 20 with the U.S. District Court, Northern District of New York.

In the 19-page filing, Lenoir alleges she was the victim of "discrimination based upon her race and sex."  Lenoir was hired as a news reporter in July 2010.  She said the first trouble came that October, when then-GM Mary Jo Beach asked her to begin co-hosting WIBX's weekday morning talk show, "First Look."  The suit says co-host and then News Director (now Program Director) Jeff Monaski "openly and persistently opposed" the pairing, but after a few weeks, Lenoir began co-hosting the program.  However, she complains that the hosting duties required her to work more hours each day, and more than 40 hours per week, without any additional pay.

The next section of the lawsuit details two occasions within a few months of each other, during which the News Director post at WIBX was vacant.  Both times, Lenoir applied and felt she was overlooked in favor of less-qualified white male applicants.

During the time between these two vacancies, Lenoir claims she was removed from "First Look" because "she failed to 'volunteer' for a work event she did not know she was required to attend."  The lawsuit further alleges that then-GM Beach "gratuitously forwarded Plaintiff an email she had received thanking Ms. Beach for removing Plaintiff from 'First Look,'" but it was believed that "Beach did not forward similar critical email to other white male on-air talent."

Lenoir also claimed that in December 2010, a third party notified her that a co-worker referred to Lenoir as a "black bitch," and also said, "that black woman does not know what she's doing."  Lenoir said she presented Beach with a tape recording of the statement.  That prompted a meeting in which Beach and Monaski had said employee apologize to Lenoir, but then after the offending employee left the room, Lenoir claims Beach told her that she "has never had so many problems until [Lenoir] came along," which Lenoir and her attorneys perceived as Beach implying that Lenoir was at fault for the employee's racist comments.  The suit goes on to say that, while Lenoir was "routinely denied raises and not properly paid for the work she performed," the unnamed employee "was given a raise and promotion" in January 2012.

Shortly thereafter, Lenoir said she filed a racial discrimination complaint with Townsquare's Human Resources office, but an investigation found there were only "personality conflicts," rather than any evidence of discrimination.

The lawsuit claims that, "throughout late 2011 and 2012, the Townsquare Defendants continued to treat Plaintiff in a manner different from all other employees and Plaintiff continued to be the sole black employee at WIBX."  In further detail, the lawsuit claims Lenoir "was routinely excluded from all office activities and denied extra work assignments even though she requested to cover them."

Furthermore, the lawsuit alleges that the outcome of an online station-sponsored "Who is Your Favorite Radio Personality" contest was rigged "to ensure a different winner was announced even though Plaintiff had been voted the winner."  Lenoir said she was often told to consider "finding employment elsewhere," and she was "accused of sabotaging other co-workers."

On October 12, 2012, Lenoir said she was fired without any explanation from Townsquare, but believes her dismissal was "in retaliation for her complaint of discrimination based upon her race."

All in all, the lawsuit alleges that Townsquare violated a total of 8 Federal and New York State laws, including discrimination based on race and sex, and unpaid overtime hours, as Lenoir was incorrectly regarded as an "exempt" employee.  On the various counts, Lenoir is seeking a jury trial for an unspecified amount in back pay, unpaid wages, lost wages, pain and suffering, front pay and/or reinstatement, compensatory damages and attorneys' fees.

A few notable items from the CNYRadio.com archives: