SYRACUSE -- Today was Alex Silverman's last day at Newsradio 570 WSYR.  After two years as an anchor and reporter for the Clear Channel station, Silverman is making a 70-market jump and a 2,700-mile drive west to Seattle.

Silverman, currently a senior at Syracuse University set to graduate in May, revealed part of his plans on his Twitter feed this morning:

Today is my last day at WSYR. If you have worked with me, supported me, or listened the past 2 years, I thank you. Exciting things ahead.

By the evening, Silverman revealed what those exciting plans are:

This June, I'll be moving to #Seattle to anchor news at the great 97.3 KIRO FM. Thanks to everyone for your support, I'll miss all of you.

According to the bio on his website, Silverman started with WSYR on weekends as an anchor/producer/reporter.  He eventually became the station's weekday morning drive news anchor.  Even though he was only with WSYR for two years, he had the chance to cover some big events (for both WSYR and Fox News Radio), including the mass shooting in Binghamton almost a year ago, and he went to Washington to cover President Obama's inauguration. 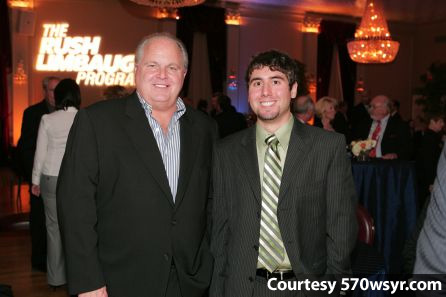 Silverman with Rush Limbaugh, CNYRadio.com Picture of the Week from December 5, 2008

Prior to joining Clear Channel, Silverman was involved with WAER 88.3 and Z89 (WJPZ) on the Syracuse University Campus, eventually becoming President and GM of the latter.  This past January, he won first place nationally in the Radio Features category of the Hearst Journalism Awards.  He'll be graduating in May with a 3.9 GPA.

In addition to covering some big stories at WSYR, Silverman also had the chance to meet some big-time personalities along the way.  Besides frequent "tweets" back and forth with well-known radio journalists in major markets, you may recall Silverman's meeting with Rush Limbaugh was once featured as a CNYRadio.com Picture of the Week.

We're always interested in what's new and interesting at your station... send your news tips to cnyradio@cnyradio.com ... all requests for confidentiality are always honored.  Or if you don't trust us, use the Contact Form, where your name and email are optional.

One comment on “Alex Silverman Leaving WSYR, Headed to Seattle”