How many of you CNYRadio readers remember the Western Electric 630A microphone?  Nicknamed "the 8-ball" due to its shape, this non-directional microphone was used exclusively at WHCU in Ithaca, New York during the 1940s and 1950s.

The 8-Ball could be converted to a semi-directional microphone by installing an acoustic baffle.

The microphones at WHCU were used in two different installations: mounted upright on a table stand, or hung upside down from the studio ceiling.

During the 40s and 50s, Ithaca High School students produced a weekly news and variety program on WHCU called "Youth Behind the 8-Ball," named after the unique microphones used on the show.

Is there anyone else out there that owns or used the Western Electric 630A microphone?  Drop me an e-mail:  rpmedia@twcny.rr.com.

Photos of the 8-Ball Microphone in Action

All photos submitted by the author.

Last April, we featured Paolangeli's personal collection of vintage microphones as our Picture of the Week.  Check it out... and see how many other models you can identify before you scroll down to see the answers. 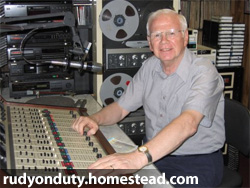 Rudy Paolangeli was, for many years, the General Manager and morning host at WHCU and WYXL.  Although he retired from his full-time duties in 1988, Rudy continues to host a two-hour program featuring nostalgic music on WHCU every Sunday from 10am to noon.  He produces the show in his own home studio (seen at right and from another angle in a previous Picture of the Week), a studio which is also the heart of his home production business, RP MEDIA.  From 1963 to 1983, Paolangeli also served as a part-time instructor for the Ithaca College School Of Communications.

CNYRadio.com thanks Rudy Paolangeli for volunteering to write this article and submit the accompanying photos.