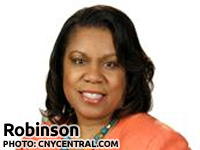 SYRACUSE -- Plenty of accolades this week for longtime channel 3 (WSTM) news anchor Jackie Robinson, who retired in September. Tonight, she's being honored in New York City as an inductee to the New York State Broadcasters' Association Hall of Fame. Tomorrow, many will gather for a $75-per-ticket retirement celebration at the Oncenter in Syracuse. And on Friday, part of James Street near the CNY Central studios will be renamed "Jackie Robinson Way."

News of the prestigious honor -- and a detailed profile of Robinson's personal and professional life -- appeared in a column by the Post-Standard's Sean Kirst. CNY Central's Michael Benny also posted a news story, and there's a Matt's Memo blog post from anchor Matt Mulcahy.

The new "Jackie Robinson Way" street signs will be unveiled at 10:00am on Friday.

The honor of "Jackie Robinson Way" is similar to one bestowed upon the late Ron Curtis of WTVH fame. A segment of James Street near the former WTVH building, on the 900 block, was renamed "Ron Curtis Parkway" following his retirement in 2000. The channel 3 building (which has also housed channel 5 since 2008) is located on the 1000 block of James Street.

Downtown, a stretch of South Salina Street is renamed "Nancy Duffy Lane" for one week each year -- the week of the Syracuse Saint Patrick's Parade. Duffy, a longtime channel 9 (WSYR-TV) reporter who passed away in 2006, is credited with reviving and organizing the aforementioned parade in 1983. The special street signs, adorned with shamrocks, have appeared along the parade route every March since 2007.