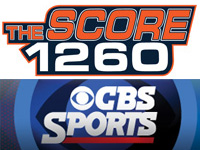 SYRACUSE -- There won't be any more "Imus in the Morning" on The Score 1260 (WSKO). The sports talk station is revamping its program schedule, effective Monday.  The new lineup reflects its affiliation with the newly-launched CBS Sports Radio network. Part of that lineup includes a sports talk host who started his career in Utica.

New York City-based Imus has always been kind of an "odd man out," as the only host on the WSKO schedule that wasn't focused on sports. WSKO picked up Imus in 2010, after his show had been carried by Clear Channel's WHEN (which, at the time, was also a sports station) for the previous year.

Cumulus Media Operations Manager Tom Mitchell told CNYRadio.com, "thousands of sports fans have asked us loud and clear for a pure sports morning show." Responding to those requests, The Score 1260 will begin carrying CBS Sports Radio Mornings, hosted by Tiki Barber, Brandon Tierney and Dana Jacobson. Their 6-9am program is followed by the first hour of the network's John Feinstein Show.

From 10am to noon, the local duo of Bud and the Manchild retain their existing timeslot.

Today's the last day the pair is being followed by Midday with Mike Lindsley. Starting Monday, he'll slide back to a 3pm start to host The Afternoon Drive with Mike Lindsley, filling most of the timeslot formerly held by Brent Axe, who left last month for a new job at syracuse.com.

Lindsley's move to afternoons provides an opening for WSKO to carry The Jim Rome Show live from noon to 3pm. It'll mark the popular sports talk host's return to Syracuse radio for the first time in years. Like Imus, Rome was also carried previously by WHEN, during the urban AC station's days as a sports talk outlet.

Mitchell explained, "our parent company (Cumulus)'s relationship with CBS Sports Radio allows us to carry as much of their programming as we wish," which led to the decision to add the popular Rome, while allowing the station to retain its existing local talent.

Adam "the Bull" on Weekends

Former Utica-Rome sports talker Adam "the Bull" Gerstenhaber is part of CBS Sports Radio's weekend lineup. From his current home base at CBS Radio O&O "92.3 The Fan" in Cleveland, where he hosts a local weekday show, Gerstenhaber will be hosting a four-hour program for the network, from 10pm on Saturdays, through 2am on Sundays.

Gerstenhaber hosted SportsWatch at 950 WIBX for three years, then moved across town to the former "SportsStars Network," where he hosted a daily talk show from 2004 until Clear Channel sold its Utica-Rome cluster in 2007.  At both stations, he performed live play-by-play of Utica College athletics.

Between Utica and Cleveland, "The Bull" spent nearly four years working in his hometown, New York City, working at the legendary WFAN.

Thanks to Tom Mitchell for sharing the details of The Score 1260's new schedule with us.  Anytime you've got news to share from your radio or TV station, send us an email, or use the Contact Form.