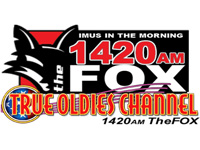 UTICA-ROME -- The syndicated "True Oldies Channel" is back in the market -- this time, at Arjuna Broadcasting's 1420 WNRS Herkimer.  The format replaces a unique "split" schedule which featured a combination of sports and business talk from two different networks.

Two things will remain the same -- the station retains its branding as "1420AM The Fox," and syndicated host Don Imus remains in place for morning drive.  Outside of Imus, it's the "True Oldies Channel," hosted around the clock by the network's founder and longtime New York City radio DJ, Scott Shannon.  The True Oldies Network, syndicated by Cumulus Media Networks, prides itself on sticking to the original "oldies" format, featuring songs from the 1950s through the 70s.  By comparison, most stations that carry a "classic hits" format have largely eschewed titles from the 50s and early 60s, while adding more songs from the early to mid-80s to their rotations.

In a press release today, Arjuna Broadcasting GM Mindy Barstein cited "an absence of oldies" in the local radio market as a factor in the decision to bring in the True Oldies Channel.  She said the station aims at the 35-64 demographic, with core artists including The Beatles, The Rolling Stones, The Beach Boys, Elvis, Roy Orbison and more.

Operations manager Jack Moran tells CNYRadio.com that listeners may find the signal sounds better than ever -- he says Arjuna recently installed a new solid-state transmitter for WNRS.  The station has also invested in some new audio processing equipment which is scheduled to be installed over the weekend.

For the past three years, WNRS had followed Imus in the Morning with Fox Sports Radio from 9am to 3pm, then Bloomberg Financial Radio through 10pm.  Overnights and weekends were also filled by Fox Sports Radio.

It was also three years ago -- in May 2010 -- that the "True Oldies Channel" arrived in the Utica-Rome market for its first tour of duty, on Townsquare Media's Oldiez 96.1 (WODZ).  But that arrangement lasted less than a year -- Townsquare eventually decided to replace the satellite feed with its own in-house "classic hits" playlist and local on-air hosts.

Some CNYRadio.com readers noticed the new programming on WNRS earlier this week, but Arjuna Broadcasting waited until today to made the news "official," piggybacking it onto an announcement of the arrival of "Genesee" Joe Trisolino as afternoon host at sister station 92.7 The Drive (WXUR).