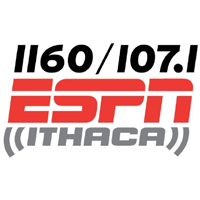 ITHACA/CORTLAND -- A new FM translator is making it easier for sports talk fans to find ESPN Radio 1160 (WPIE), especially at night.  The station is now simulcasting on 107.1 FM (W296CP), after clearing up some unexpected complications that delayed the "official" FM launch by a few months.

Frequent readers who have a mind like a steel trap might recall the simulcast was originally slated for 107.3FM.  Back in June, we reported that WPIE owner Taughannock Media paid $50,000 for the construction permit for translator W297BI.  That signal quietly launched in August, but according to a press release from WPIE, "it was determined immediately after signing on that in some key areas there was a higher level of interference from an out of market station than the advance research indicated."

The company immediately filed for permission to move to 107.1FM (a filing your editor likely missed during our "summer hiatus"), and the FCC approved the move on November 19.  According to WPIE's announcement, the 107.3 frequency was never promoted to the public, so unless any listeners happened to find it by chance, they likely never knew WPIE was on the FM dial until the 107.1 frequency signed-on.

And so far, no problems with the 107.1 signal: "It’s been a longer road than expected, but well worth the wait," Taughannock Media President and General Manager Todd Mallinson said in the press release. He added, "We’ve had great feedback from listeners on our new FM signal, it came at a great time of the year…you could say an early holiday gift."

In addition to asking permission to move a notch down the FM dial, Taughannock requested and received permission to change the translator's community of license from Danby to Ithaca.  The translator is authorized for 99 watts effective radiated power, from a site along NY Route 79 just west of Ithaca, giving it a 60dBu signal contour which blankets the city proper and some surrounding areas, 24 hours a day.

By comparison, WPIE is licensed for 5,000 watts during daylight hours from a site west of Trumansburg, a little more than 10 miles from Ithaca.  That can cover plenty of territory, but an FCC-mandated reduction to 310 watts from sunset to sunrise sharply reduces the WPIE coverage area, especially at this time of the year, when the day/night pattern changes are happening right in the middle of morning and afternoon drive.

From the "Better Late than Never" file...

Another item we missed during our summer hiatus -- a belated welcome to Jeremy Menard, who joined ESPN Ithaca as the station's program director and ops manager this past June.  Just before joining WPIE, Menard earned a Master's Degree in Broadcast and Digital Journalism from Syracuse University's Newhouse School.  While on "the hill," Menard also logged some time in the sports departments of 88.3 WAER and Z89 (WJPZ-FM).  In addition to his behind-the-scenes duties at WPIE, Menard co-hosts "Between the Lines," the station's locally-produced afternoon drive talk show.