Dan Cummings to Retire from NewsChannel 9 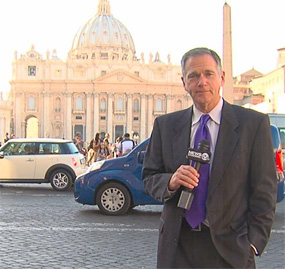 SYRACUSE -- NewsChannel 9 (WSYR-TV) anchor Dan Cummings has held many titles at the ABC affiliate over the past 37 years. By the time we bid farewell to 2021, he'll assume a new title: retiree. Cummings announced his exit plans this week on The Morning News.

Since joining what was then WIXT-TV in 1984, Cummings has served as assignment editor, reporter, anchor, managing editor, assistant news director, and news director. He's anchored every local news timeslot on the station, spending the past 13 years on the wake-up shift. He also hosts the station's weekly public affairs interview program, Newsmakers.

In his announcement on Friday morning, Cummings said, "I will be forever grateful for the friends I’ve made at this TV station and for the pure joy of working with so many talented and creative professionals."

In an article on localsyr.com, Channel 9 GM Bill Evans said, "Congratulations to Dan that after spending almost four decades with NewsChannel 9 he is ready for his next chapter. Dan has made a tremendous impact on so many people, businesses, and charities during his broadcasting career. I am truly grateful for what Dan has done for this community, the lives he has touched, and the positive impact he has had on NewsChannel 9 and our employees over his historic career."

Born and raised in Southern Cayuga County, Cummings started his journalism career at WNYR radio in Rochester, stopping at WTKO Ithaca and WHEN Syracuse before making the jump from radio to TV at Channel 9.

Cummings earned a number of significant awards for his work over the years, including a spot on the Syracuse Press Club's Wall of Distinction, the club's highest honor.

In 2012, Cummings was among a group of local journalists who traveled to the Vatican to cover the canonization of Mother Marianne Cope. In 2013, late night host Conan O'Brien included Cummings in a montage poking fun at local news anchors for using the same script to "intro" a network news package.

Some of Cummings' colleagues shared memories as they congratulated Cummings on Facebook:

Dave Bullard, who worked with Cummings at WHEN and again at Channel 9, said, in part:

[At channel 9], I got to see Dan in full possession of his professional gifts. I watched him basically ad lib a 60 second update, chatting with the newsroom until a few seconds before the red light came on, then delivering a coherent set of headlines off the top of his head, ending precisely on time. His work/life balance has never been in question. He and his terrific partner Danielle Cummings have always been family-first. Dan could easily have anchored the main newscasts of the day but the morning show fit best into his family's needs. If you were drafting a newsroom, you'd trade picks to move up to get Dan at #1. He is, simply, the best of his generation.

I've watched him since entering SU in 1990, covering stories like the blizzard of '93, the Labor Day storm of '98, elections, politics, crime, and human interest pieces. Dan made you feel like he appreciated you tuning in, and his delivery, story transitions, and general on-air demeanor made his newscasts a very comfortable watch.

Wow. I got my start in the biz post-college with Dan. Looked up to him as a kid growing up in Syracuse and was so honored to work with him for a handful of years and count him as a friend for many more. A class act in every way, Dan's retirement is a loss for Syracuse and the world of Journalism. But he's earned this retirement and I hope he lives it to the fullest!

Your CNYRadio / CNYTVNews Editor was also a former co-worker of Dan's, when I was a producer at NewsChannel 9. It's hard to say anything that hasn't already been said -- it's all true. Dan certainly earned every honor bestowed upon him and was a pleasure to work with. I join everyone mentioned above -- and many who weren't -- in wishing Dan a very happy retirement! NewsChannel 9 says Dan's final day on the air will be December 20.

We'll wrap this one up with a variety of screenshots of Dan Cummings on TV over the years. Click on any image for a larger version.

2 comments on “Dan Cummings to Retire from NewsChannel 9”