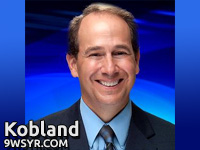 SYRACUSE -- After 20 years at WTVH and more than three years at NewsChannel 9 (WSYR-TV), Keith Kobland is making the move to a new job outside of broadcasting. Today was Kobland's final day with the ABC affiliate.

Viewers might not have realized today was Kobland's last with the station, as there was apparently no mention made of his departure on-air. CNYTVNews.com first learned of the news by chance, noticing various status updates posted by Kobland's colleagues on different social networking websites.

Since virtually all of the status updates were posted with a "friends only" privacy setting, we will not be re-posting the updates or links to the updates. However, we will say that all of the posts were complimentary of Kobland's work; it's obvious that his colleagues will miss his presence in the NewsChannel 9 newsroom and wish him well with his new employment.

According to what we've seen online, Kobland has accepted a position as a media manager for Syracuse University. CNYTVNews.com contacted Kobland online earlier today for additional comment, but we have not received any response as of 9:30pm. WSYR-TV news director Rob Cartwright confirmed for CNYTVNews.com that Kobland has left the station, but he could not provide any additional information.

Kobland joined NewsChannel 9 in March 2009, not long after his former employer, CBS affiliate WTVH, eliminated most of its staff upon announcing the formation of a shared services agreement with NBC affiliate WSTM. During his time at WTVH, Kobland covered some of the biggest stories in recent Syracuse history, including the Lee Alexander scandal, and the mass exoduses of jobs from Carrier and New Process Gear. In 2003, Kobland received the Syracuse Press Club's Selwyn Kershaw Professional Standards Award.

According to his profile on 9wsyr.com, Kobland's "greatest thrill" was riding along with the Navy's Blue Angels. Although he passed out twice during the flight, he's proud that he didn't get sick in the cockpit.

Leaving TV, But Not Radio

In addition to his reporting for WSYR-TV, Kobland has been delivering morning news updates since 2003 and handling weekend DJ shifts for Galaxy classic hits station Sunny 102.1 (WZUN). Galaxy VP/Programming Mimi Griswold told CNYRadio.com, "we love Keith!" Although he'll be giving up the news reporting, he'll continue with weekend DJ shifts. Griswold says Lisa Chelenza (from the Gomez and Dave morning show on sister station TK99) is filling-in as news anchor for Sunny 102 until a permanent replacement is found.

Kobland is the second major departure from the Syracuse TV news scene in just as many days -- last night, WSTM anchor Jackie Robinson said farewell to viewers before retiring after 34 years with the NBC affiliate. Also notable from NewsChannel 9 -- last month, Bridge Street co-anchor Kaylea Nixon announced she's leaving the station later this month, as a new job for her husband requires the couple to move to Chicago.