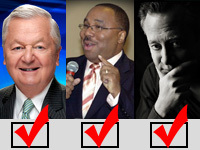 SYRACUSE -- Would you vote local TV news anchor Rod Wood into public office?  How about former local talk host Jim Reith?  At least a few people said "yes" to these and other local broadcasters, submitting their names as write-in candidates during the 2012 General Election, according to results from the Onondaga County Board of Elections.

Recently remembering the interesting finds on the write-in list from the 2011 General Election, your editor wondered if such a list had been released for the latest polling.  After searching around and not being able to find the list anywhere, we filed a Freedom of Information Law request with the Onondaga County Board of Elections.  Though we requested results from a few key races, the Board quickly and graciously provided results from every race to generate write-in votes on November 6. 2012.

Here's a quick summary of names we recognized as people connected to local or network/syndicated broadcasting.  Page numbers refer to where you can find these people in the full-list of ALL write-ins, which is embedded for viewing further down in this article.

Here's the full list of all write-ins throughout Onondaga County.  This list is exactly as the Board of Elections provided it, except we highlighted names of local broadcasters in green, and national/syndicated broadcasters in yellow.  As you'll see, there are plenty of other celebrities (like Harrison Ford, Madonna and Roseanne Barr) and even some popular fictional characters (like Pee Wee Herman) scattered throughout the list.

View this document on Scribd

Although 26 pages is plenty, it's still shorter than the 35-page list of write-in votes generated by the 2011 General Election.  However, it was noted that the 2011 ballot featured several races for which there was a single candidate, virtually assuring that candidate a win -- a scenario that tends to open up the floodgates for creative write-in responses.  By contrast, the 2012 general election featured more prominent races with multiple candidates on the ballot, so voters may have been more likely to support a candidates printed on the ballot.

Did we miss anyone?

With 26 pages of write-ins, and not knowing the name of every person who works at every radio and TV station in Syracuse, we know there's a chance we may have inadvertently overlooked some of these write-ins.  If you know of anyone else we should add to our summary, feel free to post a comment below, or send a quick note to cnyradio@cnyradio.com.