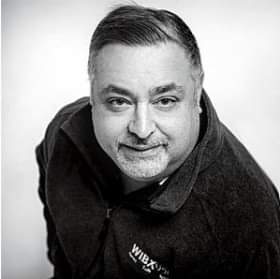 UTICA/ROME -- Jim Rondenelli has delivered his final newscast on Newsradio 950 WIBX. In a Facebook post on Monday afternoon, Rondenelli said his position was a "victim of 'restructuring'" at the Townsquare Media station, after "almost 28 years" on the job.

It's not yet apparent who or what else may be impacted by this "restructuring." CNYRadio.com reached out to Townsquare Utica/Rome GM Karen Carey for comment but has not heard back. We'll update the story if we get a response.

Rondenelli's been a staple of Utica-Rome radio news since 1982, when he started at the now-defunct 1150 WRUN. As deregulation paved the way for different AM/FM pairs to merge into bigger groups through the 1990s, Rondenelli eventually found himself at WIBX. At one point or another, he probably worked every shift on the station, from mornings to evenings, even filling-in to host the station's now-defunct "SportsWatch" program. He most recently served as News Director.

Responding to comments below his Facebook post - which we are not sharing directly here due to privacy settings - Rondenelli said after more than 40 years in radio, he will most likely focus his job search outside of the business.

On the bright side, it appears pink slips weren't the only thing handed out by Townsquare mamagement today: Big Frog 104 (WFRG) morning co-host "Polly Wogg" showed off some hardware on Facebook: