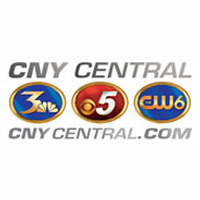 SYRACUSE -- The "shared services agreement" that brought CBS5 (WTVH) under the same roof as NBC3 (WSTM-TV) and CW6 (WSTQ-LP) could be ending in 2017.  Sinclair Broadcast Group, which recently closed on its purchase of former WSTM/WSTQ parent Barrington Broadcasting, says it's not interested in renewing the deal Barrington had with WTVH's owner.

Although we saw the first on-air indication of Sinclair's takeover of WSTM late last week, Sinclair formally announced the closing through a press release on Monday. Not much we didn't already know... until the very last sentence before Sinclair lists all the stations it just added:

The press release didn't include any further detail about exactly what that means for WTVH or WHOI.  From Granite's side, silence -- the company doesn't post press releases on its website and it hasn't issued anything to CNYTVNews.com.

CNYTVNews.com contacted both CNY Central President/CEO Chris Geiger and Granite Broadcasting CEO Duane Lammers to inquire about the future of WTVH, but so far, no responses from either side.  While we've been waiting for responses, we found we're not alone -- syracuse.com reporter Geoff Herbert also had no word from either company on what's in the cards for WTVH after 2017.

So, for now, the best we can do is try to consider some likely possibilities.  The remainder of this article is pure speculation.

Possibility #1: A new agreement between Sinclair and Granite

Sinclair simply said "it does not intend to renew" the existing agreement, but the company never specifically said it would be completely opposed to ANY agreement. That could leave the door open for Sinclair and Granite to form a brand new deal, likely one which only focuses on arrangements for WTVH.  In Peoria, the other market involved in the existing deal, Sinclair already has a close ally in Cunningham Broadcasting, the owner of the market's Fox affiliate.  We suspect Sinclair may want to move its Peoria station from Granite's facility to the Cunningham facility.

Any new deal would likely focus exclusively on WTVH's residency within the WSTM building, without any reciprocal agreement in Peoria.

Possibility #2: WTVH moves in with another station

If Granite can't strike a new deal with Sinclair, there are a couple other options.  Granite could try to form a shared services agreement with Nexstar, the owner of NewsChannel 9 (WSYR-TV).  We wouldn't even be surprised to see Nexstar's close friend, Mission Broadcasting, put up an offer to buy WTVH from Granite.

Failing that, we can't help but wonder if there's any reason why Granite couldn't form an agreement with Time Warner to operate WTVH out of the Erie Boulevard building that houses Time Warner's YNN studios.  Granite could even try to form a partnership with the Public Broadcasting Council of Central New York, the owner of PBS affiliate WCNY-TV.  As long as Granite remains in control of WTVH's broadcast license, the FCC is unlikely to have any objections to the arrangement.

According to property ownership records freely available through Onondaga County, the old WTVH building at 980 James Street is still owned by "WTVH Inc," a subsidiary of Granite Broadcasting.  It's been vacant and listed on the market since 2009, but apparently, no buyers yet.

We would imagine Granite hasn't been pleased about paying property taxes (and cleaning up after copper pipe thieves) on a building that's been empty since 2009, but perhaps it could all turn out to be a blessing in disguise.  If Granite can't find a new "shared services agreement" partner for WTVH, the company still has the ability to bring WTVH back to its former home.

But we predict this would be a last resort: Granite would have to invest millions to make WTVH a standalone operation again -- for everything from staff payroll and news vehicles to high-definition production, news and master control equipment.

Possibility #4: What did we miss?

March 2017 is still more than three years away... what else could possibly happen by then?  Anyone's guess is as good as ours, so feel free to add your own theories and predictions by posting a comment below.