Year in Review 2013: Remembering those we lost 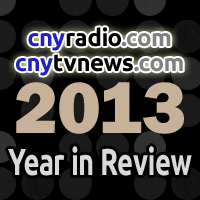 CENTRAL NEW YORK -- Two people at two different stations, who worked at their respective stations for decades, climbing the ladder to upper management... some pioneers in local television... and a few who left us much sooner than expected.   In this installment of our four-part "Year in Review," we pause to remember the local broadcasters we lost during 2013.

2013 Year in Review: What You Missed and What's Next

On New Year's Eve, it's our tradition to count down the top 10 stories of the year -- but those are based purely on site traffic stats.  The numbers don't always necessarily correlate with the importance or magnitude of a story.  So we want to know what YOU think was the biggest story in local broadcasting during 2013.  Click here to fill out our nomination form.  Your name is completely optional -- so you can chime in without sharing your identity if you like.  Any nomination backed-up by a valid explanation will be considered.  Nominations are due by 4pm on Monday, December 30.